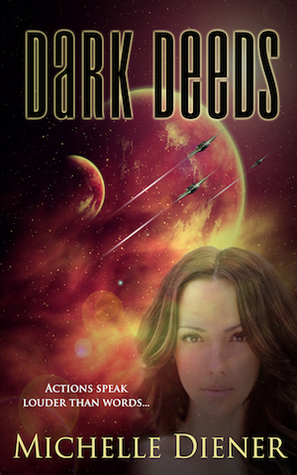 Fiona Russell was abducted from Earth and forced into manual labor aboard a ship of unfriendly aliens who beat her, mocked her, and tried to hide her very humanity. She was waiting to die. Until the day a group of murdering pirates boards her vessel and clocks her over the head.

Hot on the trail of those pirates is the handsome Grih Battleship Captain Hal Vakeri. Fiona is a human, which makes her only the second of her kind ever discovered in his region of space. He rescues Fiona, determined to take her back to Battle Center Headquarters and find out how and why she was abducted in the first place, not to mention bring her captors to justice.

But as soon as she gets on board his ship trouble starts. Long range communications are down, The investigation team hasn’t shown up at the rendezvous point, and there could be a traitor on board trying to kill the human who might know too much.

When someone kidnaps Fiona from right under his nose while his ship is docked at a way station, Hal goes after her. She was his charge, after all. It has nothing to do with how attractive she is or the way her singing captivates him so.

The trick is, when he is finally reunited with her, the question becomes who saved who? Before they can answer that question, they are thrown into a tangled web of secret hideouts, alien experiments, and political machinations that could spell trouble for the Advanced Sentient Beings across the galaxy. But alone and cut off from anybody who can help them, except a ship with a child’s personality, they may already be too late.

I did something so out of character for me that it still surprises me when I think about it. I read a book in a series out of order. This goes against everything inside me. It’s not right. And when I read Dark Deeds, I know why.

Because now I already know the plot of the first book in the series and I have been robbed of the chance to be as delightfully surprised by it as I was by the second. And you can bet your bottom dollar that I’ll end up reading the third.

Not all of the aliens we meet are humanoid, the ship is a character, there’s a parrot with a foul mouth, it has a romance arc (but is still a clean read); what’s not to love?

My disclaimer over my love for this story is that I read it because it was suggested to me as a comp for a manuscript that I’ve written. So, clearly, I’m drawn to the themes and concepts.

I will say that at times the pacing felt a little off, and there are a couple of plot points I would argue are a little too convenient. But overall, if you are looking for a good, quick, sci-fi romance, this is a good choice.