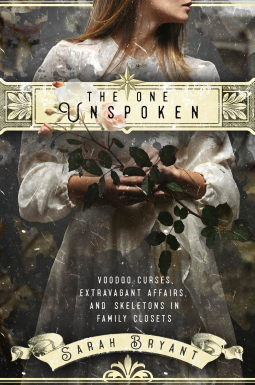 Sidonie Verdier was born in pre-Civil War Louisiana in the middle of a hurricane to a dying mother. Her father long gone to gamble his family fortune away, she was alone in the world before her life began. Her mother’s newly freed slave takes Sidonie in after she sees the tell-tale signs that Sidonie has the sight–she can see spirits.

The freewoman rears Sidonie on the abandoned plantation until her father returns home seventeen years later, determined to marry her off to the highest bidder. In the meantime, though, Sidonie falls in love with Gabriel, the son of the freedman next door.

Their relationship is illegal and could easily get both of them killed, but the ghost of Sidonie’s mother is on their side. When Sidonie’s father finds the perfect suitor and engages his daughter to the man without her consent she realizes that if she wants to be with Gabriel they have to run away to Europe. If they don’t run now, she’ll be married and he’ll be stuck running his father’s plantation–or worse.

I picked up this book because it is set in the south. I’m a southern girl and like to see how other people see the places that I’ve grown up knowing. The period setting of the book prepared me for some of what I read, but not all of it.

In short, sensitivity readers are important. Sidonie is reared by the former slave Adelis, who gives up her freedom to take care of the little white girl that she grows to love like a daughter. Adelis teaches Sidonie all about how to handle spirits, about zombies, and about voodoo. Sidonie even practices a ritual at one point. And until her father makes her, she wears her hair in braids and dresses like the slaves around her.

Just because the author acknowledges the inherent unfairness and desperation of the institution of slavery does not mean she can’t be guilty of cultural appropriation and romanticization. Adelis’ immediate maternal attachment to Sidonie even after she hated her mother to the core, Adelis and Gabriel’s mother are both voodoo practitioners originating from Haiti, Sidonie is welcomed without hesitation when she wanders into a slave celebration in a poor part of New Orleans and allowed to take center stage with the musicians, and Sidonie’s machinations–with Adelis’ help–is responsible for several of her father’s slaves being free in a twisted sort of white savior tale.

It’s not just problematic racially. Her gay piano teacher who lost his lover to cholera and the moment the ghost is “laid” (literally in the same instant) he moves on to the only other gay character in the book for a relationship. She even describes the light from his dead lover fading into his new boyfriend to try to explain why he falls for him so quickly and out of the blue. His grief over his deceased partner is gone in an instant because now there is another gay man in his life. Poof. Boom. Instant chemistry because they’re both gay. That’s it.

I don’t like to write bad reviews, but I feel like this story is problematic from the start. I found myself skimming over it just to get to the end and find out how deep the issues ran.

The author doesn’t seem to be malicious, or even aware, when it comes to the issues I’ve named. I don’t think it was purposeful. In fact, I get the impression she was trying to show a different side of the period society than most stories offer, but her execution of that desire went awry.

Perhaps I’m wrong about my interpretation of it. It’s possible. In any case, I can’t help but think that if you want to read about slave culture and voodoo that there are better sources out there.

2 thoughts on “Book Review: The One Unspoken by Sarah Bryant”