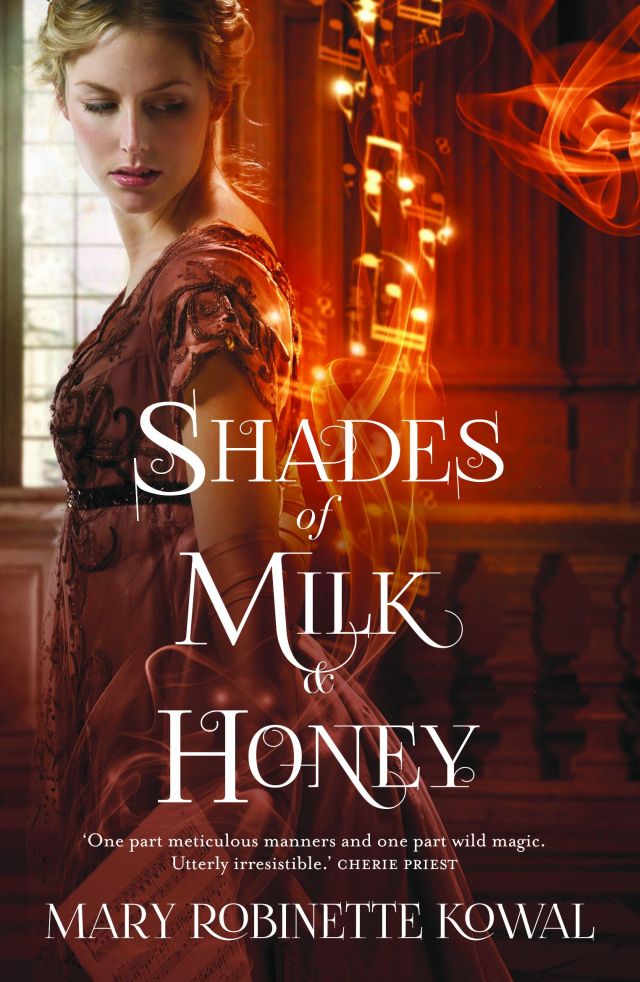 Using glamour is an art form. A young lady must be very skilled to master the art of pulling folds of it from another plane and using it to create images and sounds in this one. And all well-bred young women are expected to be skilled. It is, after all, one of the “womanly arts”.

Jane is nearing the age of spinsterhood and has accepted her fate. Her gorgeous sister, Melody, can wrap men around her finger with very little effort, but Jane is not considered beautiful and feels awkward instead of flirtatious. But working glamour is where Jane shines. Everyone in the county knows of Jane’s particular skill and she is often called upon to entertain during parties.

It is at one such party that Jane meets a professional glamourist. Like all “womanly arts” such as painting and playing music, the paid professionals are actually all men. And Mr. Vincent is one of the most lauded glamourists in all England. But his haughty manner rankles Jane. She wants to learn more about his techniques, but his company tests her composure.

Jane would prefer to dodge the handsome but infuriating Mr. Vincent, but his work is exquisite and she is desperate to know more. As she studies his creations, she tests her own version of his technique. While testing one such technique, one that obscures her from view to anyone outside the fold of glamour, she overhears some distressing things regarding her sister and her latest suitor. Jane must use her skill and her wit to save the family from potential ruin because, in a world where illusions can be pulled from thin air, nothing is quite what it seems.

This was billed as Jane Austen meets magic and I was sold. I found the series in a used bookstore in the Staff Picks display and bought the series. Jane Austen, magic, discount. That is a powerful combination, my dears. I was all in.

With hints of Pride and Prejudice, Sense and Sensibility, and written in an alternate history where magic is quite literally an art form, this hooked me from the first chapter. Having said that, if you don’t like Jane Austen, historical fiction, or alternate histories, stop here. This book isn’t for you. If you are practically squealing with delight, carry on.

I like that this wasn’t a simple retelling. It definitely paid homage to specific Jane Austen tales, but it was not the exact same story plus magic. Not that there is anything wrong with that, but I enjoyed that this was a little something new.

Jane isn’t beautiful. She knows it and everyone else does too. She is not one of those girls who thinks she’s plain when she’s secretly gorgeous. While not ugly, she isn’t pretty either, and no excuses are made for it. Once or twice she does wonder what it would be like if she were pretty like her sister, but she isn’t the type of character who dwells on it. Her talent with glamour earns her as much praise as her sister’s beauty, even if it feels a bit harder to come by.

She loves her sister, but she does get annoyed by her behavior. Jane is not a saint or a martyr. She hides her feelings behind a mask of propriety, but her ire–and the guilt over the ire–are there. As someone with two sisters, I appreciated that her love for her sister didn’t erase or negate other emotions. You’re allowed to love someone and not like them all the time. But I digress.

On the flipside of the coin, let’s look at the low points.

The magic system can be hard to follow. The rules are clear, but what the characters are actually doing can sometimes be difficult to picture. It is described using terms most often associated with laundry or linens (wraps, folds, sheets), bubbles, and ropes (braiding, knotting). I just had to roll with it at first until it started to make sense.

I have to grade using the same rubric for everyone, so I have to bring up diversity. There isn’t any. Although, I will point out that, having read all but the final book in the series now (I haven’t had time to read the last one, but I do have it), that the author does remedy that. She brings in new characters of different ethnicities and sexual orientations, though the latter is talked around as you would expect for characters living in the early 1800s. But in the first book, nada.

I found that to be true of most of my criticisms of each book. Whatever I found lacking in one book, the next book in the series seemed to address. It’s as if (I know it sounds crazy, but just hear me out) the author was learning from her mistakes and growing as a writer. What a concept. Let’s all try it.

Overall, I enjoyed the book. I recommend the series, or at least books 1-4 since I haven’t actually read number five yet. Did you really think I was going to give it a thumbs down? Jane Austen with Magic! The only way this could have hooked me faster was if it had been set in outer space.

Your mileage may vary.